Bit is the component collaboration platform. Bit leverages component reusability by providing an ecosystem for sharing components between applications and across repositories.

The major frontend frameworks - React, Vue, and Angular - all share the concept of using component-based architecture to compose state-of-the-art applications. Even browsers themselves are backing components as an inherent feature by supporting the Web Components standard.

Bit adds a semantic layer on top of repositories that maps files into components. This extra layer provides Bit with robust capabilities in making the component reusable across projects.

A Bit component is a reusable piece of code, such as

The exact boundaries of the component are a design decision. It is possible to package a whole library as a single Bit component or split each functional piece as a separate component.

In a bird-eye view, code options can boil down to these: 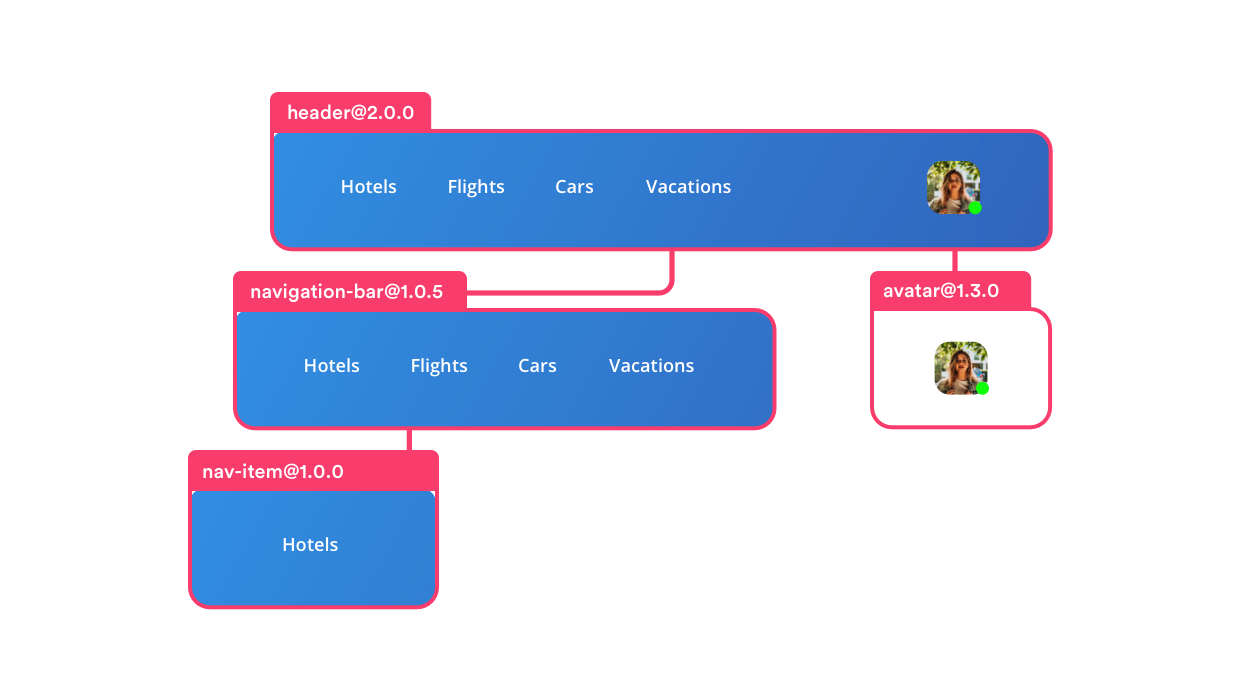 While the first option is possible with Bit, Bit is geared towards working with the second option, where each UI component is a Bit component. When working with smaller discrete components, each one versioned on its own; you can enjoy a broad set of benefits:

A component starts its Bit journey by specifying the source files.
Typically, the component’s content is not just the source code itself and can include additional files that are related, such as the styling files, assets (images, fonts), test code, documentation.
Bit maps the set of files to a component, with a particular file as the entry point for the component. Bit marks the entry point file as main.

The dependency graph makes a component self-contained and allows moving the component around projects without losing any references.

Bit links each component with a set of tools and configurations. The tools are dedicated components that can take the component source code and its dependency graph and generate some desired result.
The most common tools linked to components are:

-Compiler: compiles or transpiles the original files and generate built artifacts. The artifacts are consumable by applications or other components. Compilers are specific for frameworks and usually also for flavors of the framework, as they contain the configuration required to run them.
-Tester: An extension that runs the tests associated with the component and returns status.

Here is a bird-eye view of a component life cycle:

Once residing on a remote scope, the component is available for consumption by other workspaces. The ways to consume the component are by installing it or by importing it.

Components let you split your code into independent, reusable pieces, and think about each piece in isolation. Bit manages each component separately to ensure its independence and reusability.
Wrapping each component in a detached environment reduces the risk of component misbehaving when moved between different projects and applications.
For each component, Bit builds a context disconnected from the rest of the project. Inside this context, Bit creates a full environment required for building, testing and rendering the component.

A component context is similar works in a way a separate repo for an NPM package looks like:

All the information about the component is encapsuled as part of the component data. A component imported into a new project comes bundled with all the configuration data needed.

Each component has a unique id. We use the Component id when installing the component, importing it, or utilizing it in the project.
A full ID of a component comprises from the collection name, namespaces, and the short Id:
owner.collection/namespace/namespace/short-id; Using namespaces allows organizing components in the same way we organize files inside folders.
However, the above name is not usable when installing the components with package managers (Yarn, NPM). Then, the name translates to:
@registry-name.owner.collection.namespace.namespace.short-id. For components stored on bit.dev, the registry name is always @bit.
To use the component in the code, you should import as follow:

Bit components are versioned using Semantic Versioning. Creating a new version of a component is done by tagging it with a new version. Bit then snapshots all the component's files and dependencies. New versions of components are shareable to remote scopes using the bit export command.

Bit is a CLI based tool for working with components. Bit stores components in two formats:

Bit creates a workspace inside a working project when running the init command. From that point on, you can create components and checkout components from the local scope into the workspace and use them in the project.

Inside a workspace two types of components exist:

Use the bit tag and checkout commands to transfer a single version of a component between the local scope and the workspace.

Note: Bit workspace and scope are highly inspired by the mechanisms used in Git for managing a git workspace and a git repository, so if you are familiar with those, it is easier to understand Bit.

The remote scope is a scope that resides on a server, also called a bare scope, since it is defined outside a workspace.
A remote scope is used for sharing components, so it is, in fact, a place where components are exported to and imported from.

A user can set up a Bit Server that holds remote scopes for sharing components between Bit workspaces. Alternatively, users can use bit.dev for storing remote scopes of components.

The diagram below highlights the main commands that move components between the local workspace, the map index (.bitmap file), the local scope (.git/.bit) and the remote scope: